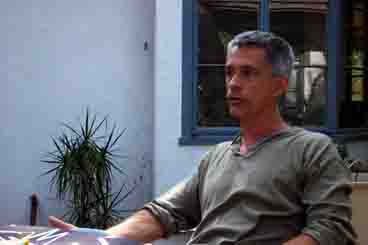 I was born in Washington D.C. to a career U.S. foreign-service family.  Both my parents, Janet and Raymond were born in New York City.  My mother's heritage is both Peruvian and Scottish-American. She grew up in Peru and Puerto Rico.  My Peruvian family originated in the southern highlands.  Arequipa, Peru is an old colonial city made of white pumice surrounded by three volcanoes.  It is a beautiful city with cobalt blue skies and shining white stone buildings.

My father was of Irish descent and raised in the Big Apple.  He was educated as a lawyer at Fordham University but dedicated his professional life to U.S. law enforcement, intelligence, diplomacy as well as defense.  My older sister, Suzanne Marie, was also born in Washington D.C.  In 1956 we moved to Buenos Aires, Argentina where my youngest brother, Paul Anthony, was born. My older brothers, Gregory Lawrence and John Graham, were born in Lima, Peru and Caracas, Venezuela. So we were already a very U.S.-Latin American family before we moved to Mexico D.F. in 1957.  Mexico City was our family home for more than twenty years.
In 1961 my mother re-married and we gained a "new" five-year old brother, Michael M. Scott. He is son of Winston M. Scott, an Alabama native and accomplished mathematician as well as a U.S. foreign-service and intelligence officer, and Paula Maeve Scott, a native of Ireland. Michael and I are almost the same age. Our family life in Mexico was close to U.S.-Mexico relations and to the vibrant life of that great city. It is perhaps the place of my most formative years. Indeed I came to see things in ways contrary what might be expected in an expatriate family rooted in U.S. government service. One strong influence came from the liberation theology that was accepted in the Catholic Church at the time.

My educational experience began at a small British school in Mexico D.F. Known by its quaint name, Greengates School, the Instituto Anglo-Mexicano was located in a private house in a residential neighborhood for decades. It had green gates!  In the late 1960s, Greengates moved to a much more scholastic campus in the suburbs of the city. It remains one of the outstanding private schools in the city that serves a large expatriate community from throughout the British Commonwealth and U.S. as well as a largely Mexican student body. All my brothers went there. My grade school and upper school teachers did much to encourage independent thought. Some of our teachers at Greengates were also students at the U.N.A.M. and saw the violent repression of the student movement in 1968 first hand. So I was radicalized in 1968 by my Spanish teacher who had me read Gabriel García Márquez' One Hundred Years of Solitude.

My sister was also radicalized by 1968. She attended the Liceo Franco-Mexicano or Lycée Français in Mexico. Paris was crackling with ferment that same year. She moved to France to continue her studies and remains committed to social justice and progressive causes. In 1970 my brother Michael and I were sent to the Taft School, a preparatory boarding school in Watertown, Connecticut. It was the first time I had seen it snow! I would soon learn what it was to be a fish out of water during my three years there.  But it was a good school for studying French existential literature and philosophy.

In 1971 my stepfather, Win Scott, died, and my mother moved the family to Rome, Italy. My youngest brother, Paul, attended St. George's School in Rome while Michael and I completed our years at Taft. My brother John was studying at Fairfield University in Connecticut and Gregory attended Schiller College in Paris. Suzanne Marie finished her schooling in Université de Tours in France, and continued in Paris at the Ecole Supérieure d'Interprètes et de Traducteurs. We loved our trips home to Rome and I developed a love for all things Italian, especially their attitude toward food. Michael and I were able to travel home on holidays to Italy. We both graduated together in 1973 and moved West to attend universities in California. Michael attended Occidental College in Los Angeles and I went to the University of California at Santa Barbara. The rest of my educational biography appears in my CV on this site.

Despite my family's extensive U.S. foreign service history, my own intellectual leanings and political views are markedly different. My 1968 radicalism matured but never waned. My interests moved from philosophy and politics to environmental problems and the food resources of the poor. Using various approaches commonly seen as political ecology, my studies have taken me from an interest in sustainable agriculture, and food sovereignty to broader environmental resource questions, including genetically modified crops, marine fisheries conservation and coastal zone development. I hope I will never lose my special bond with Mexico or with the Spanish language.

My work has always been informed by a radical critique of corporate capitalism and the technocratic management of the economy and resources. I am particularly interested in interdisciplinary theories that straddle the divide between radical political ecology and social theory on one hand, and ecological science and resource studies on the other. Underlying this scholarly interest is a more personal commitment to work for a more Latin American view of things that is decidedly free of United States dominance, and determined by the needs and aspirations of the millions of people who live in the Spanish and Portuguese speaking continent and culturally diverse Caribbean region.

On August 9th, 2018, I lost my husband of thirty years, Scott Tracy Imler.  He was only 60 years old but had survived many life-threatening challenges including lung cancer and heart failure.  We were married for ten years after the then Mayor Antonio Villaraigosa married us in his press chambers at City Hall in 2008.  Scott was a pioneer in drug reform, securing the right of sick people to have access to medical marijuana in California through an initiative he helped write in 1996, Proposition 215.  We lived all over LA but especially valued our years in West Hollywood.